Tanvie is a Delhi girl who has played for big clubs like Tottenham Hotspurs and Fulham. She was born in Punjab and brought up in New Delhi. Tanvie started playing Football at the very young age. She has the natural connection with this beautiful game known as “Football”.

Tanvie started playing football at the age of 8 with boys. At the age of 12, she started playing competitive football with girls. Tanvie studied in a Vasant Valley school in Delhi and at that moment only this school was having girls football team. She then played in different categories like under-15 and under-17. Everything was going fine for her like a fine silk but in the summer of 2008, she suffered the biggest setback of her life. In 2008 she was called up for Indian football team under-19. She was there in a camp for 1 month but later she was not allowed to play football for India as she was holding the British passport.

But like Joel Osteen said, “Use your setback as a setup for your comeback”. Same was in the case of Tanvie, she left India and traveled to the UK. After graduating from Delhi’s prestigious Jesus and Mary College in 2011, she left to pursue Masters from the University of Exeter. This hitch doesn’t stop Tanvie in becoming a Professional Footballer. And in this university, she got the taste of the most difficult league i.e English premier league. Tanvie used to be the captain of school and college team of her. But here she was not even selected to the 1st team of university football team. She was selected for the second team of the university football. After some good performance for the second team, she was selected to the first team. After completing her master she came back to India. 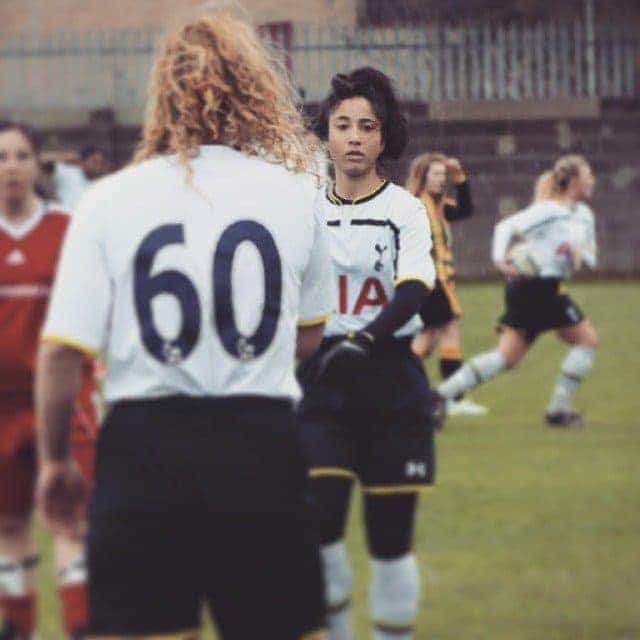 In India, she was still connected to this game. Now she worked hard on her physicality as in England if you are technically sound you need to be physically strong as well to become a Professional Footballer. The struggle is woven into the fabrics of Tanvie’s life but this hasn’t stopped Tanvie in becoming a Professional footballer. Her hard work was paid off in 2013.

In 2013, she was selected to play football for Tottenham Hotspur. In her heydeys, she plays for Tottenham reserve team and Tottenham second team. She never got a chance to play for Spurs A team. After 2 years at Spurs in 2015, she made a move to Fulham. When she tried for Fulham at first they put Tanvie in the reserve team. After some good performance, she was transferred to 1st team. At Spurs, she used to play as a winger but at Fulham, she was the Main Striker. Playing for the first team of Fulham is the favourite memory of this Delhi Girl in England.

For a Delhi girl to play in England for a clubs like Spurs and Fulham is a big achievement. Just imagine a girl of this calibre and quality playing for India. After 3 successful years in England in 2016, she came back to India. What she is doing right now is raising funds for 400 underprivileged girls to play Football. Tanvie was meant to play for FC Pune City in Indian Women’s League but as she was holding British passport she is not allowed. Nearly every day she goes to Passport office so that they can allow her to play football in this league or in future for India. She can unlock a defence with a pass and she can sprint beyond the defensive line to stretch with her blistering speed but only if she is given a chance.

Indian Government what else do you want? She is the pure definition of “True Indian”. One who left England for the sake of developing Football in India. One who gave up the lifestyle of England just to help Indian girls progressing in Football. If money was the case for her she might have lived in England. But no she is true Indian who came back to her motherland. The way the ocean refuses to stop kissing the shoreline, no matter how many times it’s spent away. In the same way, Tanvie is just not giving up on this dream of wearing Blue jersey of India one day.

Just bring dual citizenship here in India or make an exception for a sportsperson because we are losing talents like her.